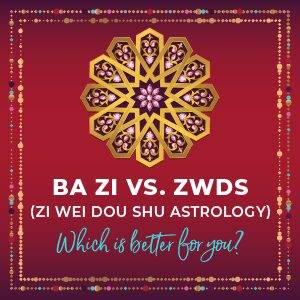 There are some critical differences when it comes to Ba Zi versus Zi Wei Dou Shu. Let me start by clarifying that these Chinese Astrology Destiny Science modalities are not fortune-telling methods. Both are highly regarded as ancient systems of Chinese Astrology life map readings. Both can identify information for life, career, wealth and destiny readings.

People often wonder which method is better or more accurate — Ba Zi or Zi Wei Dou Shu Purple Star Astrology? It's not a simple question to answer. Both styles of Chinese birth chart readings have their own features and benefits. My goal is to help you understand the differences between the

Ba Zi is a more comfortable and user-friendly modality of Destiny Science as compared to Zi Wei Dou Shu. If you want a quick analysis of a person’s overall life, career, business decisions, how people operate and think, then BaZi is suitable for that and pretty accurate.

Ba Zi Birth Chart Reading is a bit more abstract. It draws on the practitioner’s own experiences and philosophical understanding of Chinese Metaphysics to draw conclusions. It is based on the interactions of the 10 Heavenly Stems and the 12 Animal Zodiacs.

The concept of redefining and redesigning your destiny requires a detailed analysis of a person’s nature, character, situation, behavior, activities, and opportunities. Zi Wei Dou Shu is a more complex modality compared to BaZi.

In ancient times, Chinese astrology was commonly applied as a diagnosis to implement Feng Shui remedies. Applications included calculating and complementing time and space with people and buildings, basically to achieve harmony between a person’s internal chemistry, energy, or Qi with the Qi of the external environment.

Originally known as the “Heavenly Stars Astrology, or Wu Xing,” this Astrology style was based upon the balance between the five elements that form the 5 Elemental Energies philosophy. During the ancient era of the Qin Dynasty, around 221 B.C. to 206 B.C., Imperial astronomers turned to real stars (planets) in the Heavens (nightly sky) for answers.

These astronomers named the five major planets in our solar system by the elements like the Venus as Metal, the Jupiter as Wood, the Mercury as Water, Mars as Fire element, and Saturn to represent the Earth element.

According to this classical astrology system, a person’s destiny will be determined by these five stars or planets’ celestial positions. Then you also included and calculated the location of the Sun and Moon. The Imperial Astronomers calculated the 7 Stars, the time of the native’s birth, and the Zodiac cycle of the 12 animal signs derived from Jupiter’s orbit to plot and calculate information. This highly accurate system was formed by the 28 lunar sectors, which then termed as the “7 Stars, 4 Auxiliaries Astrology,” also known as “Qi Zheng Si Yu” Astrology.

Grandmaster Ping is also known as the founding father of Ba Zi Destiny Science Analysis. This system is based on the science of balancing the Yin and Yang polarities of the elements of the Five Stars and the 12 Animal Zodiac, located within the Eight Characters inside the Four Pillars that consist of Four Heavenly Stems and Four Earthly Branches representing the year, month, day, and hour of birth of the native. Ba Zi discards the planetary movements’ interpretation like it was done in the early Qi Zheng Si Yu Astrology system.

During the same period, Grandmaster Chen Xi Yi created Zi Wei Dou Shu Astrology that uses virtual stars. These stars were derived from the positions of the celestial nodes of various planetary bodies that could decode precise details with a comprehensive analysis of information. Zi Wei Dou Shu, however, was restricted to the exclusive and private use of the Emperors in Imperial China because of its high levels of accuracy with detailed forecasting analysis.

The Meaning of Qi and Shu

Most philosophical concepts in Chinese Metaphysics and Cosmology are rooted in the ideas of “Li Xiang Chi Shu” from the I-Ching, the Book of Changes.

The difference between Zi Wei Dou Shu and Ba Zi

ZWDS and Ba Zi are the two major destiny science systems found in the 5 Major Arts of Chinese Metaphysics. Both have their own strengths and decoding destiny methods and use a different way of calculations and assessments.

One of the frequently asked questions of destiny decoding is which one of these two systems, Ba Zi versus Zi Wei Dou Shu, is more accurate?

In my opinion, both Ba Zi and Zi Wei Dou Shu are pretty accurate systems of destiny decoding. The question of Zi Wei Dou Shu accuracy or Ba Zi for that matter primarily lies in the skill and experience of the practitioner.

However, accuracy is different from specificity and details. If we compare Ba Zi versus Zi Wei Dou Shu, the two main destiny decoding tools, Zi Wei Dou Shu is more specific. However, for determining the prognosis of a situation, Ba Zi is much faster in deriving the information than ZWDS, which spans many different charts to get to the bottom of things.

Analyzing the root cause of a problem using Zi Wei Dou Shu charts takes time. However, this system is highly specific in creating your blueprint of success that can help you redesign your destiny and elevate your success.

If you'd like to dive a little deeper into which one is going to provide you with what you're looking for, I recommend starting with the Beginners Guide to Zi Wei Dou Shu. You can download a copy below.

It outlines how the stars and palaces work to provide a reading and how you can go about getting a reading yourself.